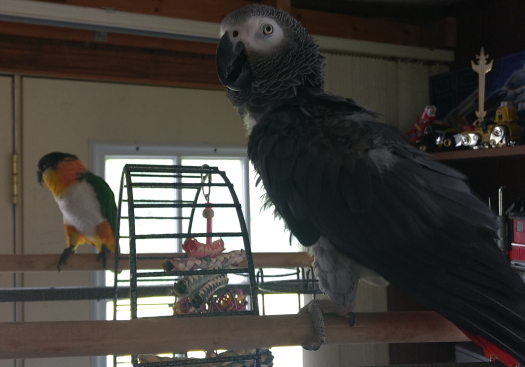 Life with one bird is interesting. Life with two is like leveling up.

Avery is challenging. He was our first bird, hatched in 2011 and ours since spring of that year. Having a Black-Headed Caique – or any bird – is like having a baby, toddler, or pre-schooler. You can read up on it all you want, but until you experience it, you can’t know what it will be like. Because just as every child has a different personality and way of interacting with you, so do birds.

Over the years, we’ve trained Avery, kept him entertained with assorted toys, and also learned he enjoys quiet cuddles. He is at his most positive with interaction and trick training, like many birds. We’ve also taught him good shoulder manners, i.e. you only get mommy’s (my) shoulder if you’re willing to step up and come off when someone says so.

My husband always wanted a second bird, preferably an African Grey, but I thought they were too large. Let’s face it, those beaks are a heck of a lot bigger than a caique’s, and I’ve seen the damage an angry, hormonal, territorial small bird can do to a finger (by the way, you should not get bitten if you’ve learned your bird’s signals; respect their space and don’t push/force interaction; that’s a great way to lose their trust).

But I agreed that Avery could use a companion… if they got along. That’s always a chancy thing, too, bringing home a pet that may or may not jive with your existing household. Case in point: our cats. Kobold can’t stand Shiva, and Shiva seems to think it’s hilarious that all he has to do is look at her, and she runs from him.

However, I said yes to a second bird, which is my limit, and asked a friend about finding one who was being rehomed. She was rehoming some of her birds, because as her kids had grown up, gotten full time jobs, and moved out, she and her husband found they couldn’t keep up with the demands of their own full time jobs, plus outside commitments, plus birds. We met their Congo African Grey, and my husband was smitten. He wanted “his” bird, because Avery is bonded to me. Thus, Apollo the 12-year-old Congo African Grey came to us.

Right away, we learned that our birds have two different personalities: Avery is a spaz, playful, strong-willed, and cuddly. Apollo is shy, uncertain, and sweet. He won’t allow petting, but he will express himself with the various sounds he learned living with his previous family and flock.

After a few days of getting to know Apollo, establishing a routine, and also seeing the dynamic between both Apollo and Avery, we’ve determined some new goals for Avery and training goals for Apollo.

They’re both wicked smart birds. Both know the “step up” command, which is appropriate for all parrots to learn. Apollo needs to develop trust in his new family, as well as self-confidence, so training sessions with his new family should instill this in him.

I’ve been training Avery ever since we got him 8 years ago. This includes potty training and trick training, but Daniel will also target train him to give him focus. We will also use Avery to demonstrate flying for Apollo as a way to get from point A to point B. Avery flies wherever he wants, usually my shoulder or head (permitted because he has good manners about stepping up when told). We would like Apollo to feel like it’s okay to fly, too.

It’s not that he can’t fly, but when he tries, he just sort of… descends. 🙂 We will also continue trick training Avery, as caiques are clownish little guys who love to play.

Daniel will use target training with Apollo to teach trust and focus, and also help him stop his aggressive preening. He came to us with some plucking and we don’t expect to see that stop right away. If anything, it might get worse, because he’s in a new home with new people, and that’s scary as heck for anyone. But redirecting his focus while building a bond should help.

We would like to teach him enough trust for us to pet him. Daniel is doing this very slowly and, so far, Apollo will let him touch his wing and pet just above his beak. No pushing this. When Apollo uses his beak to gently move your finger, he means no. We respect his no.

Flying will come with time and trust, we think. We hope using Avery to demonstrate will help.

We also hope dietary changes will help Apollo. He enjoys sinking his beak into something substantial and really shredding it, so we have him on a fresh diet of fruits and vegetables (loves his broccoli stems!), with a homemade chopped/blended veggie/fruit/boiled eggshell mix every other day, and seeds and pellets for treats. We will introduce more formulated pellets for a balance between fresh food and optimized bird nutrition.

Like Avery, Apollo is encouraged to forage and shred. They get seeds as treats and stuffed inside foraging/shreddable toys.

A daily routine is in place that we also hope will help instill trust – a morning shower, breakfast, training, some quiet time with this toys, more training, more quiet time with his toys. And then the kids come home from school (4 days a week) and I come home from work (5 days a week), which means BUSY time. We all eat our dinner in the kitchen, birds and humans. All of us are in bed fairly early, because parrots need about 8 to 12 hours of sleep themselves.

And that is life with birds. I think having one stay-at-home person is important when you have pets that need this much attention. That isn’t doable for every family and I know how privileged we are that we can have one stay-at-home parent for the kids and birds!

As I said previously, it’s like having a toddler. Except you have that toddler for 20+ years. Maybe even 40, 50, or 60. Like parenthood, “parronthood”/a bird’s life isn’t for everyone. But those of us who embrace it find it immensely rewarding to watch our “babies” grow. 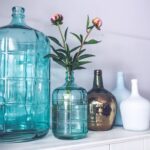 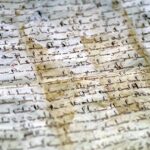 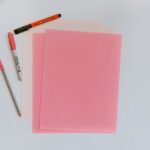