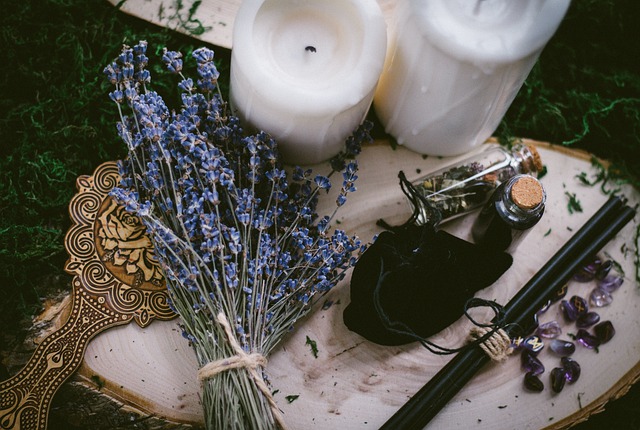 This week’s topic is going to be a little all over the place for me, because religion may have played a major role in the lives of my distant ancestors, but I have few stories to tell. My father is somewhere between Atheist and Agnostic, so I grew up without any knowledge of religion until I was in fourth grade and became fascinated by various ancient pantheons of deities.

By the time I was 13, I’d told my father I wanted to be a Witch. Maybe the diverse people I had in my life – a Wiccan babysitter and my dad’s astrology-loving girlfriend when I was younger – had a part in that, as well. My dad never explained church or Christianity to me, because we never attended. But, ever the hippie, my dad responded to my desire to be a Witch by giving me a book by Scott Cunningham, along with some candles and incense, and I’ve never looked back.

For personal interest, I’ve learned about Christianity, Islam, Hinduism, and Buddhism, but to this day my spiritual path is still Pagan. My mtDNA has me pondering my Jewish lineage about which I knew – and still know – nothing, until DNA gave me some hints. I do, however, have a couple of stories on my mother’s mother’s family to share when it comes to worship.

Catholic… Except not anymore

My Italian ancestors were, of course, Catholic (which makes me think my maternal ancestors may have possibly fallen more into the Crypto-Jew side of things, and perhaps found a way to hide their beliefs or integrate them with Catholicism somewhere in the transition from Spain to Portugal to Italy). Five of my great-great grandparents’ eight children were born in Massachusetts.

According to the story told by my great-grand aunt Espezzia, her baptism caused a little bit of a stir for the family. After the priest baptized Espezzia, my great-great grandfather gave him everything he had on him to pay. However, he wasn’t able to pay in full at the time. He told the priest he would bring the rest of the money later.

The next Sunday, the priest announced to the congregation that he had done a baptism for which he hadn’t gotten paid. My great-great grandfather paid the balance after that and said they would never return to the church. “And they did not,” according to the family history my aunt Espezzia recorded. Sometime later – whether it was months or years, I don’t know – they started attending the local Methodist church with a family friend.

A bishop… Except not a bishop

Another family story shared in that same history was that my great-great grandmother had an uncle who was a bishop. Well, I looked and looked, and found nothing on either side of her family as far as uncles involved in the church. Perhaps there is one out there, because I’m still researching my 3rd and 4th great-grandparents in northern Italy.

However, there was a nephew who was a Catholic theologian. Ernesta’s older half-brother, Bartolomeo Spiazzi (1865 – aft. 1925), married Anna Costa on 30 Jan 1910 in Moneglia, Genova, Liguria, Italy, and had two sons: Enrico Giacomo Attilio (born 1920) and Aurelio Giovanni Emmanuele (8 Jan 1918 to 14 Oct 2002). Aurelio changed his name to Raimondo Spiazzi, perhaps upon his ordination in 1944 (I’m not sure how Catholic priest naming works). Raimondo taught religion and published many treatises on his beliefs. He was a theological advisor to Pope Pius XII from 1954 until the pope died in October of 1958.

Our family doesn’t know much about Raimondo or his life, but it’s clear from the information out there that his work was controversial, and that he was deeply devoted to it.