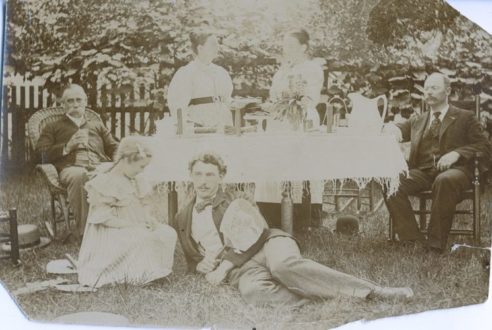 With the availability of DNA testing, I’ve seen quite a shift in what I always thought I knew about my family.

It started in 1989. I saw a photo my grandmother had of her family and wanted to learn more about it. I found out that the little girl in the picture was my great-grandmother, Nina Gertrude Blake. Prior to that, I’d already been hooked on genealogy, but had no idea how to go about researching or figuring out who was who. My grandmother then showed me something even more precious – a crumbling leather wallet full of more photos, typed family histories, Civil War documents, and more.

Since then, I’ve been proud to be the keeper of these documents and photographs, and researched my family history almost exhaustively.

But I don’t think I was counting on any of it to change, even when I took my first DNA test in 2006. Or subsequent DNA tests.

It wasn’t until 2018 that I realized DNA testing had changed everything I knew about my family history. The first discovery was of a first cousin I didn’t realize existed. The second was the realization that my grandfather’s father wasn’t who we thought it was.

Judy Russell often reminds us that if we aren’t ready to face such potential news, then we shouldn’t test. And, like Judy, I haven’t met a DNA test I don’t like. I’ve had my DNA tested with Family Tree DNA, Ancestry DNA, and 23andMe. I’ve posted my results to GEDMatch and MyHeritage, and someday I will test with Living DNA to break down my significant British heritage.

For me, DNA is a powerful tool and one of many we can and should utilize in the pursuit of understanding family history. It’s made me rethink how I look at certain people in my family. Not in a negative way, but rather in an attempt to understand them, to put their lives in context. They are no longer here, so I can’t ask why they made the decisions they did. But maybe by studying time and place and circumstances, I can get a little closer to some insight about why they were the way they were.