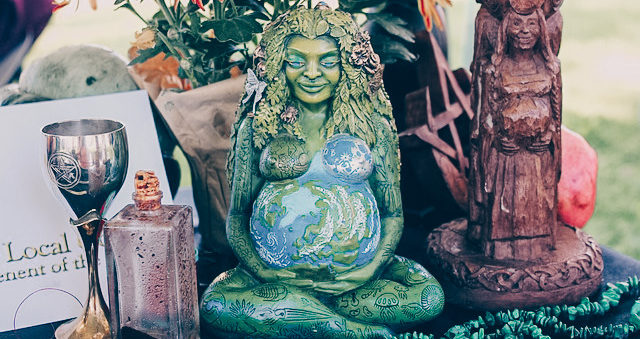 In my last Witchy Wednesday post, I briefly defined and discussed monotheism, polytheism, monism, and dualism. I’d like to continue sharing my thoughts on this by delving into pantheism and Panentheism. These are probably the two most confusing words in the religio-magick lexicon, as they sound so alike, yet have two different meanings.

Pantheism is the doctrine that all aspects of the Universe are divinely inspired and that reality is only a manifestation of divine inspiration.

Panentheism is probably a word with which most people aren’t familiar. It is the belief that God/dess is immanent within the Universe, but also transcends it. In Panentheism, God/dess is viewed as creator and/or animating force behind the Universe, as well as the source of universal morality.

So what exactly does that mean? As my father always liked to say, “Think about it, Wendy…” (Of course, this was generally after he challenged me to not talk for 30 minutes.) The most basic way to explain it is that in pantheism, everything is God/dess. However, with regard to Panentheism, everything is a part of God/dess, yet also apart from God/dess.

Pantheism allows folks to simply say, “It’s up to God/dess” and leave life at that. Panentheism has the advantage of allowing us to be co-creators and participants in the Universe, and requires more of a sense of personal responsibility in that regard.

This is another pair of ideas that requires us to think for ourselves, to contemplate which makes more sense to us and our own spiritual view of “life, the universe, and everything”.

I’d also like to share some thoughts on Paganism and Neo-Paganism. There can be as much confusion with these core words of our vocabulary, than as any of the longer, more intricate words. For example, ask someone if they are Pagan, and you may get the response, “No, I’m Wiccan.”

Naturally, a definition of Paganism appears to be in order here, however it can be hard to define something that tends to be rather broad and abstract. Here is the definition I have come to over the years, which ultimately had to be broken down into three parts:

1. Pagan can refer to any of the non-Abrahamic religions: someone who is not Christian, Jewish, or Muslim. But would a Hindu or African tribesman refer to themselves as Pagan? Unlikely, so to expand upon this definition;

2. Pagans practice earth-based spirituality. This still does not fully explain Paganism, because Native American spirituality is also rooted in nature, yet not considered a Pagan religion. So the final criteria may be;

This definition won’t work for everybody, but as I said before, Pagan is a difficult word to define.

And just to muddy the waters, we also have the word “Neopagan,” which simply means “new” Pagan. People often prefer one term over the other, as Neopaganism may refer to a more modern and original spirituality with roots and inspiration in history, while Paganism tends to refer specifically to a reconstructionist point of view.

Please keep in mind that both Paganism and Neopaganism are proper nouns that describe a religion or religious movement; hence the first letters of both words ought to be capitalized when used. The same goes for an adherent of these religions (Neopagan and Pagan). Furthermore, remember that Pagans aren’t necessarily theistic. It is very possible to be an Atheist and a Pagan, just as one can be a Christian and a Witch.

And speaking of Witch, which is what I am, I plan to conclude my little exploration of vocabulary with a look at Wicca and Witchcraft, and how they fit under the Pagan umbrella in next week’s Witchy Wednesday post.